Deion Colzie was a three sport athlete participating in football, basketball, and track and field at Athens Academy located in Athens, Georgia. While he played both offense and defense, Deion played the position of wide receiver and was among the top recruits in the nation, listed as one of the ESPN 300 top athletes of 2021. He was a starter four consecutive years, getting his first start as a freshman in 2017. He was a three time Region Champion and a two time State Runner-Up for the Class A-Private State Championship.

Over his four year career at Athens Academy, Deion received many honors in all three sports. He was selected as a pre and post season first-team athlete on offense and defense for three years and was selected to the 2020 preseason team as an “athlete”. Deion received the Most Outstanding Player award in basketball, was selected to the Region 8-A First Team, and chosen as Athlete of the Week in 2019. He holds the school record in high jump with a jump of 6’8” breaking his own previous records of 6’4”, 6’7″, and was on the 4 x 100 meter relay team setting a record at the GHSA 1A Private State Meet on May 9, 2019.

Although Deion received numerous accolades, his most prestigious honors were his selection to the 2021 All-American Bowl Game. As a kid, Deion dreamed of what it would be like to one day play among the nation’s top athletes and his dream was realized on November 13, 2019 when he was officially invited to play. Only 100 of the nation’s best high school athletes are chosen for this honor. Next was his selection as a 2020 AJC Super 11. The Atlanta Journal-Constitution selects the preseason Super 11 to recognize the state’s most promising high school football players. Deion was the 2nd selectee in Athens Academy’s school history. Finally, was his selection to the 2021 Polynesian Bowl held each year in Hawaii.

Deion gave of his time as a volunteer with the organization Extra Special People. A local organization that provides opportunities and support for individuals with special needs. He also volunteered with the spring football camp lending his expertise to the next generation of wide receivers.

When he is not on the field or volunteering in the community, Deion’s hobbies include fishing, golf, boating, reading, and playing video games. He is currently a student athlete at The University of Notre Dame where he is continuing his academic and athletic career.

Deion grew up in McDonough, Georgia, a suburb south of Atlanta. He began playing football at the age of 4 and also played basketball and baseball. In his early days Deion was a running back since, of course, they weren’t throwing the ball until around the age of 8 or 9. Deion exhibited talent on the field early on as he was always one of the fastest kids on the team, and not to mention the tallest. He always seemed to love football over other sports.

Deion was always a student of the game because he would spend his time studying plays and making sure he knew exactly what he was supposed to do and why. He even started writing plays for his coach at age 8 telling the coach, “hey coach I know we tried this in the game but I wrote this play so let’s try it and see what happens.” As his love for the game grew so did his talent.

When he entered middle school, he hoped he could play his position as a wide receiver; however, the school really needed a QB and Deion was up for the challenge. He led his middle school team to the semi-finals two years in a row with undefeated seasons until the losses in the semi-finals. 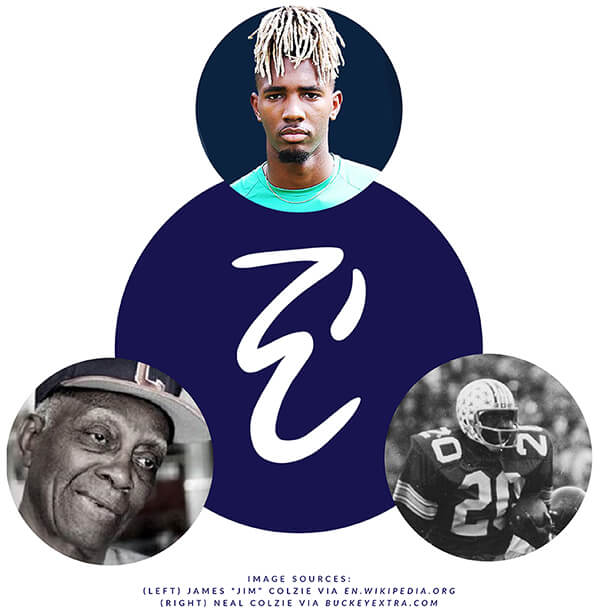 Deion’s natural athletic ability can certainly be linked to his lineage. He is a relative of former Ohio State defensive back and first-round draft choice Neal Colzie. Neal logged 40 interceptions between his college and professional careers with three organizations, including the Super Bowl XI winner Oakland Raiders, Miami Dolphins, and Tampa Bay Buccaneers. But it doesn’t stop there, Neal’s father James “Jim” “Fireball” Colzie was a celebrated Negro League pitcher from 1942-1956 playing for teams in Indianapolis and Atlanta.

Maybe it’s safe to say that athleticism is in the Colzie DNA.

We look forward to hearing from you. For more information, questions, or inquiries including scheduling Deion for an appearance at your event please complete our contact form. Someone will respond to your inquiry within 24-48 hours of the request.